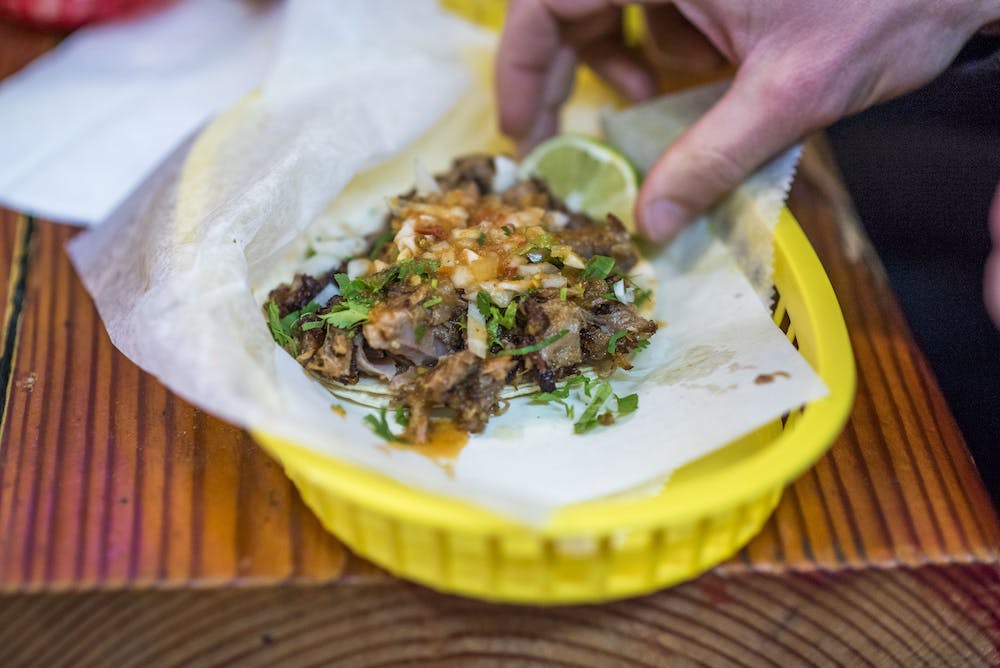 San Francisco has been the inspiration for poets, filmmakers, artists, and musicians. There’s a lot to see in the city by the bay, and 24 hours isn’t a lot of time to see it in, but don’t worry! This guide has you covered for all of the San Francisco essentials!

Start out your day with a hearty breakfast in the Haight. Brunch and breakfast done right are among the many things that San Francisco prides itself on, and the Haight District in particular is one of the most popular breakfast and brunch spots in the city. You’ve got a lot of amazing restaurants here, but our favs are The Grind Cafe, a cute little neighborhood spot with a creative menu and an awesome selection of coffee, and Pork Store Cafe, a diner-style breakfast.

Weekend brunches always see long lines out the doors, but if you get there for an early breakfast, or on a weekday, you’ll have a much easier time getting a table.

After you’ve fueled up for the morning, enjoy a leisurely stroll through the quirky Haight shops. The area was once the birthplace and cultural center of the hippie movement; and although a lot of the free love and hippie spirit has left the neighborhood, the off-beat boutiques and stores still linger.

You’re right next to Golden Gate Park, too, so be sure to give yourself an hour or more to wander along the park’s paths. Museum enthusiasts might want to pause here and scope out the DeYoung Museum and the California Academy of Sciences. If you’re lucky enough to be here on a Monday, Wednesday, or Friday, you can get into the Japanese Tea Garden for free before 10am- and it’s definitely worth it. Spending a few moments among the serene koi ponds and zen gardens before you plunge back into the bustle of the city is highly recommended.

Make your way to San Francisco’s famed Chinatown – busses frequently leave from the Haight, and you can hop on one at the intersection Haight and Cole. We recommend hopping off at Union Square, a few blocks from Chinatown. If you’re into boutique shopping, you might just want to spend the afternoon at Union Square – it has the largest collection of department stores and upscale boutiques in the United States. Even if shopping isn’t your thing, the grand architecture surrounding Union Square and the people-watching make it worth walking through.

Stroll a block east from Union Square, and then turn north on Grant Street – that will take you right through the Dragon Gate, Chinatown’s entrance. As the largest Chinese community outside of Asia, Chinatown is a must-see, and has some of the best cheap shopping and cheap eats in the city. Grab a bite at the House of Nanking – if you have time to wait in its perpetual line, or snack on some Dim Sum at The Great Eastern Restaurant.

Grant Street is the main road through Chinatown, and it gets a bit touristy; Chinatown’s alleys are where the neighborhood comes alive and shows its character. Wander off of the main street, through the brightly colored Waverly Place, through Spofford Avenue, where revolutionary Sun Yat Sen held secret meetings during the early 1900s, and through Old Chinatown Lane.

What visit to San Francisco would be complete without a ride on the city’s historic cable cars? From Chinatown, walk over to Powell St. and Clay St. to catch the Powell-Hyde line. As the only manually operated cable car system in the world, they are a unique cultural experience, and well worth the $5 per ride. A word of advice – ride on the outside rail, like a true San Franciscan. If you’re lucky enough to be crossing paths with another cable car, high fives are expected.

From the end of the line, head north to the waterfront. The Buena Vista Cafe, just one block north of where the Powell-Hyde line ends, is the perfect mid-afternoon stop – the cafe is famous for bringing Irish Coffee to the United States. The recipe that its owners perfected decades ago is the same one still in use today.

Enjoy a walk along Fisherman’s Wharf. Your route will take you past some of the most classic San Francisco sights, including Pier 39. Make your way through the crowds out to the end of Pier 39 and catch a glimpse of the infamous Sea Lions that have made the marina their permanent home.

You’ll also see Coit Tower, perched atop Telegraph Hill. A walk up to Coit tower can be a long undertaking, especially with the hefty set stairs that you have to climb to get to the top of Telegraph hill, but it’s well worth admiring from afar. Built as a monument to Lillie Hitchcock Coit, the eccentric San Franciscan who became patron of the city’s firefighters, the tower bears a distinct resemblance to a fire hose nozzle.

You might be wondering: What about the Golden Gate Bridge? You’ve no doubt been seeing it in the background as you go about your day, but getting a close-up look is an absolute must for any trip to San Francisco. Instead of making your way all the way out to the Presidio to see it from the shore, a sunset cruise is a much better way to get up close and personal with the bridge.

Cruises depart from Fisherman’s Wharf regularly, but make sure you book in advance. If you have a chance to really plan in advance, a night tour of Alcatraz is highly recommended. You can do an Alcatraz tour in the morning or afternoon, too, but nighttime is when the island shows its character – and its spookiness – best. Even if you don’t get onto the Rock, a sunset cruise will take you out onto the bay where you can get some fantastic views of San Francisco’s infamous prison.

When you get back, enjoy a nighttime walk along the Embarcadero down to The Slanted Door – some of the best Vietnamese food in the city, with some of the best views. La Mar Cebicheria is another nearby option for dinner that serves up some fantastic fresh Peruvian cebiche.

You won’t be surprised to hear that in San Francisco, there’s always a party going on. Every neighborhood has its clubs, and you can find wild parties easily if that’s what you’re looking for.

We’re more into quirky bars – after all, quirky is what San Francisco does best. The Saloon prides itself as San Francisco’s oldest bar. It’s one of the few buildings to have survived the 1906 fires – primarily, according to the stories, because the firemen knew that a brothel was operating upstairs. The Old Ship Saloon has, possibly, the most unique start of any bar in the city: when it first opened, it was operating out of an old ship that had wrecked in the bay and been towed to the beach. If you happen to be in the city during a major sporting event, Yancy’s is the sports bar to be at. And did we mention that San Francisco likes its quirkiness? Kennedy’s Pub and Curry House is just about as off-beat as they come, but cheap Indian food and good beer is an utterly perfect combination.

Create Your Own Customized Private Tour

Love the look of our San Francisco tours, but feel like customising them to make exactly the tour you're looking…

Love the look of our San Francisco tours, but feel like customising them to make exactly the tour you're looking for?

Create Your Own Customized Private Tour

Love the look of our San Francisco tours, but feel like customising them to make exactly the tour you're looking for?

Click here to Call to Book Call to Book
Lonely Planet Experiences: Flavors and Murals of the Mission From 89

Lonely Planet Experiences: Flavors and Murals of the Mission

The Mission might be San Francisco’s oldest neighbourhood, but this district has turned into one of the trendiest parts of…

The Mission might be San Francisco’s oldest neighbourhood, but this district has turned into one of the trendiest parts of the city.

Lonely Planet Experiences: Flavors and Murals of the Mission

The Mission might be San Francisco’s oldest neighbourhood, but this district has turned into one of the trendiest parts of the city.